After all it’s the Bolivian Amazon Jungle

Well Rurrenabaque certainly didn’t disappoint us, in fact we ended up staying for 15 days so I think that says it all !. Suddenly it was time for shorts and T-shirts as we had hit over 30 degrees. Merv was back in DIY mode using our awning so as we could sit out for our breakfast, even at 7am we needed shade ! It is often referred to as ‘Rurre’ and is a lovely tranquil village situated along the river Beni. The appeal of Rurre (yes , getting in on the local lingo) really is its natural beauty of the Bolivian Amazon Jungle/rain forest and pampa both of which still have large numbers of wildlife.

Of course here you can also visit Parque Nacional Madidi, which covers over 1.8 million hectares and is home to mammals, amphibians,more than 1000 bird species, trees over 800 years old, also numerous plants, so really we were spoilt for choice. Where would we start, so much to learn about. The Bolivian Jungle/Rain-Forest is amazing. The local guides all have grown up in the area so are really knowledgeable about the fauna, flora and the forest in general. They can explain animals habits and they know to listen for their sounds so as to track them. They know about natural remedies from the plant life in the forest which they use for remedies for fever, cuts, colds and insect bites. The guides know the general chitter chatter of each bird, and can tell how close they are so spotting them gets a lot easier.

Our trip to the jungle began by canoe, in the rain I might add, for about half of the six hour journey into the deep forest. It may have been raining but it was not cold, in fact it was a welcome relief. Along the river shore you can see many homes where people are still living, I think about six communities live along the shore. We spotted many birds to which our guide Ronny was up to date with, knew their names in 3 languages, English, Spanish and the Scientific one. A black caiman, many capybaras ( which are large amphibious rodents) were also spotted. A very rare spotting was The Tapir , and judging by the many scrapes on his back Ronny assumed it had been in a fight with a Jaguar. The icing on the cake would have been to see Jaguar, maybe next time! We had our boxed lunch sitting on the bank of the river , and here also it was possible to use bano o natural (natural toilet).

Crocs and Spiders. What a combo

We stayed deep in the river forest by Lake Chalalan when in Madidi Parque, and each day we took walks, some up to 6 hours to see how life in the jungle lives and survives. On three occasions we tracked the wild pigs, and luckily the third time we managed to not only see, but also to smell them. They move very fast through the jungle munching on everything and anything that is possible, so they are also very noisy. They are easily spooked by humans so you have to remain very quiet and crouch very low to the ground, so they don’t see you. Once they spot you they run like a bat out of hell. The red howler monkeys were a treat as they swung from tree to tree, and as they live at the very top of the tall trees, you really have to strain your neck to see them. Many Capuchino Monkeys we spotted also, which are much lighter in colour than the howler monkey. Even in our camp we had visitors, I always checked my boots/crocs before I put them on, just as well I did as this big spider decided to take his siesta in it. Yes, it was poisonous, lucky escape.

Funny if his name was Wrench….

We were really interested in the Primary Forest part as here we saw so many old trees, some of which are over 800 years old. The biggest being the Cotton Tree, but to mention some others are The Almondrillo Tree, Chonta Palm, Walking Palm, Ficous Tree, Garlic Tree, Jungle Papaya and the Monkey Vine. We had never seen any of these trees before, and the size of some of them was amazing. They looked liked they could nearly touch the sky. Nesting in some of these trees were many bees, hard at work making honey. Speaking of hard working we mustn’t forget the leaf cutter ants !.

Large butresses on the cotton trees

Of course, where there are trees, there are many birds, and to mention just some of those that we saw are, White Wing Swallow, Meali Parrot , Cormorants, Watsons, Great Egrit, Cap Heron, Snow Egret, Little Blue Heron, Kingfishers both the Amazona and the Ring Head one, Grey Black Hawk, Rosehigh Hawk, Black Vulture, Large Bill Terin, White Belly Parakette and the list just goes on, so I won’t bore you. Perhaps one of the greatest sightings was to see The Maccaws, such bright and beautiful colours as they peered out of their homes, which are holes in the rocks.

Red crowned woodpecker, hard to see in the gloomy forest

the Watson bird, a rough translation of the local name

Red and Blue Macaw landing into it’s cliff side home

We also walked at night to see how alive The Jungle is . It is really dark, but fantastic to listen to all the different sounds. We saw many spiders with their huge webs, flat toads, poisonous caterpillars, frogs, and even a boa constrictor (snake). One night we took a canoe trip across the lake at about 9.30 pm, I could hardly see in front of me with the fog, but never the less Ronny was able to paddle our canoe and still spot the eyes of the caiman’s with his torch. It was so quiet on the lake perhaps even a bit spooky as you could only see such a small distance in front of you, just as far as your torch could shine, which wasn’t that far, what an experience. We were the only three people on the lake, but no doubt the caiman’s were keeping a close watch!

We also did a trip to the area known as the Pampa as it is more open than the Jungle, with a few different attractions. We had to travel in the back of landcruiser that should have been retired about 10 years ago for 3 hours to get there,and then travel by river canoe for 3 hours but it was worth it. The Pink River Dolphins were a real treat to see, also the many Turtles, Alligators and a very nice sun-set one evening. Not so sure seeing the Anaconda and the Cobra snakes were a treat, as I shiver when I look at snakes even in a book or on TV, but then again we were in Jungle so choice was not an issue. I shivered even more when the cobra decided to slither over my boot, as my guide shouted don’t move a muscle, I didn’t dare. We also did some Pirana fishing which were cooked and eaten that evening for dinner. Mind you the most essential thing to bring with you to either of these places is loads of insect repellent, as without it the mosquito’s will have a feast. Even with it they have a snack! The sandfly also lives along these banks ,another little terror.

Sunset in the Pampa

Speed Kills. This turtle tried to run across a log and see what happened.

To sum The Jungle up we really enjoyed it, leaving such a wonderful and different place was difficult, no more the sounds of the zillions of insects, the singing of the birds, the frog chorus, the howler monkeys screaming to mention just a few memories that will stay with us for a long time.

Ruerre maybe at the edge of The Jungle, but the town itself is quite well equipped. Loads of hardware stores, yes Merv was in is element, I think he visited most of them, as he was on the hunt for plexi-glass to repair our broken window . Successful he was, so hopefully it will last ok until we can get the correct window shipped to us. We got the oil changed in the axles and the gear box of the truck , so as you can see it wasn’t all fun time!

Road to La Paz from Rurre

Sadly it was time to start driving again, after 15 days rest for the truck, it was about to earn its biscuits again ,as due to some road restrictions you can only travel back to La Paz on Sundays, hence we did 13.5 hours on Sunday. We only did 266 kms in that length of time due to the road, and from the pictures below I think you can see for yourself why it was so slow. Not for the faint hearted either. Oh, we started the day by towing out a car that was stuck. We didn’t make it the whole way back to La Paz, so we slept just at the bottom of the Death Road, thought it best to tackle the road in daylight, also the views were super in the early morning. It was an early start 5.45 am on the Monday morning, as the road closes at 7.30 a.m., but we made it and we even got our truck washed en route , a day’s work finished so early!

Imagine bringing this down the death road. Luckily we met him on a wide bit

What a great trip, looking forward already to other parts of the Jungle in South America! 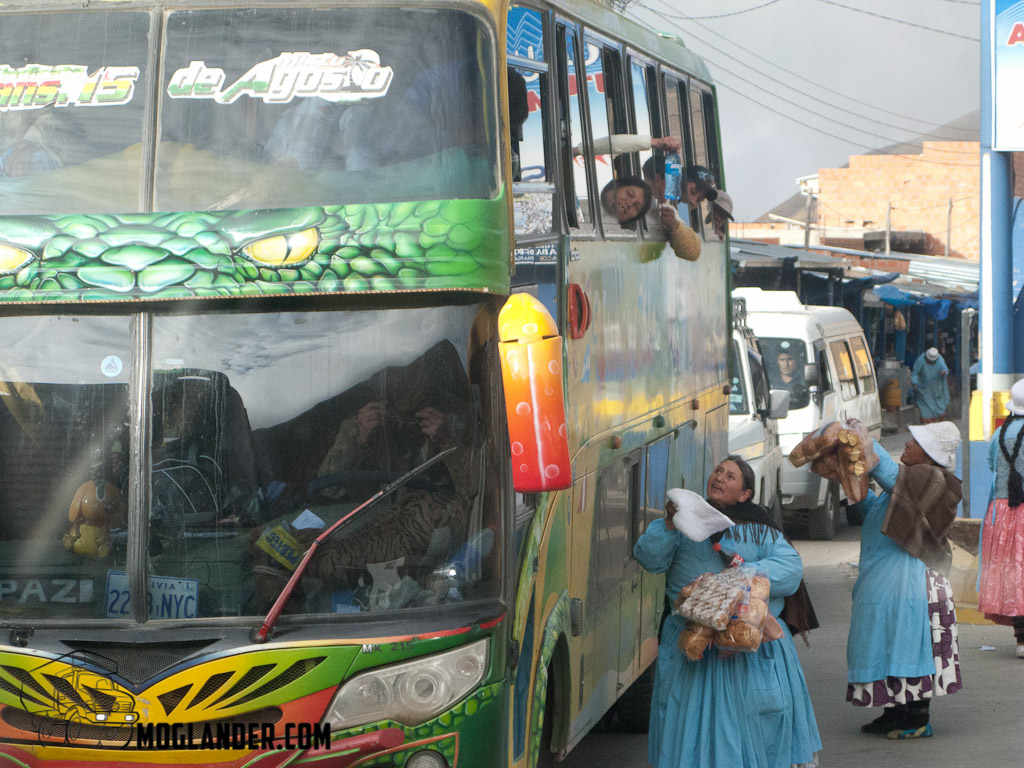 Posted under Bolivia and tagged with wildlife
Comments (1)

One Response to After all it’s the Bolivian Amazon Jungle