After the highlights of the past few months, we wondered if we could get back into “normal” traveling mode, which to us means following our own path and seeing what sights or events that we come across. We’re quite happy to take it all in, the good, the bad and the ugly. After our trip to the Galápagos and having just hiked the Inca Trail to Machu Picchu with our friends Claire and Robin, we were wondering what would come next that could possibly hope to complete with the highs we had been experiencing. This is Peru – We should not have worried.

On the road again after Cusco

First off, we had to leave Cusco. This is not an easy task to manage as it’s an easy place to spend as much time as you have. That, and the small narrow streets leave many drivers of large trucks with a cold chill down their backs, but leave we did. We miss Cusco and its strange charm. Definitely there are way too many people selling massages, tours and enticing you into their restaurants, but behind that it is a nice place to visit.

We took the road back to Nasca, the same one we drove up with Claire and Robin. We normally hate driving the same road twice, but since we were going in the opposite direction to the last time, it seemed like a whole new place to us. Even the weather was different. When stopped to try photograph the vast expanse of desert and mountain to

Nasca to Cusco road, not for the feint hearted

We got caught in some road construction work, and as the only traffic moving was coming towards us, I thought I would take the opportunity to show some of the trucks that they have in Peru. For most of our blog readers, sorry about this, but we have some truck fans who might get a kick out of this. 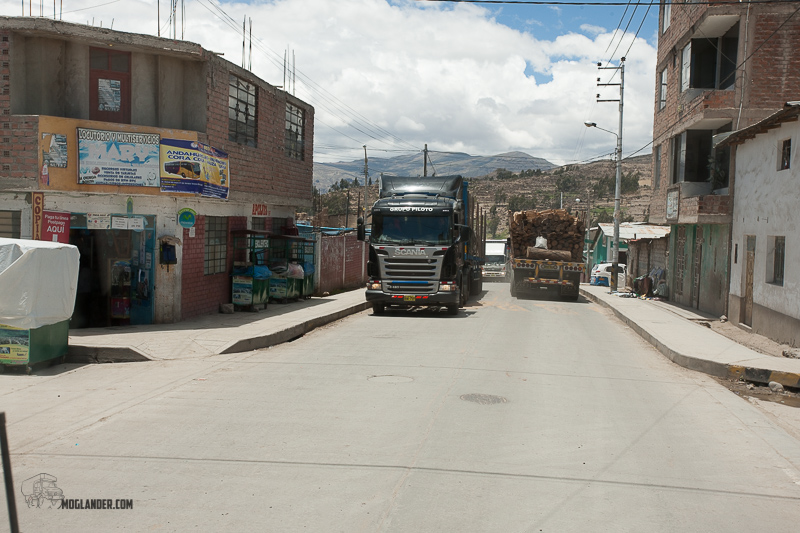 Image 1 of 16
We decided to travel up Peru pretty quickly, but we also made a few quick stops on the way to see some of the lesser known sites, such as this one at Caral. Basically, the Incas are what Peru is famous for, but for hundreds of years before the Incas were around, other groups were building cities, pyramids, sacrificing people, irrigating deserts for agriculture and fishing the oceans. Loads to see in Peru!

old Pyramid is hanging in there.

Us, out for our first horse ride in South America

We were on our way to see the mountain range known as the Cordillera Blanca, where our friends Jurgen and Ruth, and Phil and Angie had spent some time and said it was super. And so it was. We were tight-ish on the number of days remaining on our trucks TIP form (it’s Customs “passport” while in Peru), so we decided to just spend 3 nights, 4 days there. Our first day we decided to spend horse riding, it seemed a little easier than hiking all over the place but I (Merv) had not quite figured on it working some muscles that had not been exercised in quite some time! While out riding with Diane from the Lazy Dog Inn, we learned that they run volunteer programs, a School, a textiles program, a cafe all for the local community. They were due to run their annual Christmas “Choclatada” in a couple of days. A Chocolatada is basically like a

a bit different to the view through the windscreen, but it’s still nice!

sports day from when I was a kid, followed by the kids getting a present of a toy, and a cup of hot chocolate. We asked if they needed any help, and we were quickly signed up as a couple of Elves and helping our in any way we could.

Wayne would be the chief elf….

Diane was on toy giving-out duties, the small kids had to be carried by Mums.

Each team had an elf with the teams flag color, which matched the color of the ribbon on the kids arms

Controlled mayhem is the best was to describe things

The huge drum was the hot chocolate being prepared

The view from the Lazy Dog inn is spectacular

The schoolhouse, built by Diane and Wayne is great.

The Caterpillar company helped out with a few toys….

For us, to be involved in a community event that was held on such a local and intimate level was superb. We had witnessed some great community events before, but we had not had the chance to be quite this involved in it, and it was great! our plans for a few days hiking went out the window, but we felt we got a lot more from those few days by being involved with the Lazy Dog Inn and their programmes.

Posted under Peru
Comments Off on Andean Christmas Traditions